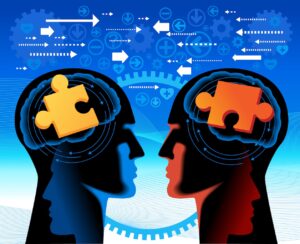 Job sharing is a phenomenon in which a job is performed not by one person but rather by two (or possibly more) people. Like any relationship, a job-sharing relationship flourishes when the individuals who share the job are compatible with each other. However, compatibility means something rather different in a job-sharing relationship compared to, say, a romantic relationship. Of course, two individuals who want to share a job need to be compatible in the sense that they are both interested in the same job and that they are both sufficiently qualified for that job in terms of educational background and prior work experience. But there is a lot more to job-sharing compatibility than this. Based on the research literature on interpersonal compatibility, which we have applied to the context of job sharing, we define compatibility as a function of three components: competency, similarity, and complementarity.

The first component, competency, refers to the extent to which each of the job mates (i.e., the employees who share, or intend to share, a job) individually exhibits dispositional tendencies that facilitate success in work situations that require interaction and coordination with other people (e.g., the other job mate). In brief, individuals who score high on the personality traits of conscientiousness and agreeableness exhibit high competency; individuals who score low on these personality traits exhibit low competency. In particular, our focus here is on how individuals score with regard to several facets of conscientiousness such as orderliness and facets of agreeableness such as affiliation. Unlike similarity and complementarity, which we discuss next, competency is a property of individuals: each individual can be assigned a score on competency. Thus, for two job mates, competency can be calculated as the average (i.e., arithmetic mean) of the two job mates’ competency scores. 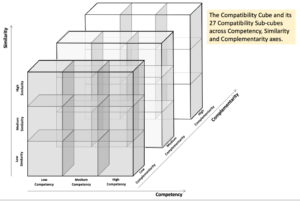 But what of cases where compatibility is lower than desired because the pair receives low scores on one or more of the three components? There are two ways to overcome this. The first way is to optimize the pairing process, such that each individual is ultimately paired with other individuals with whom he or she is most compatible. In other words, after an individual takes a compatibility test, an algorithm calculates his or her compatibility with every other individual and then provides the individual with a few recommendations regarding other individuals with whom he or she is most compatible. The second way is to increase the compatibility of a particular pair of individuals. This is accomplished by inviting both individuals to complete a series of activities that build trust and liking, develop a “common mental model,” structure the situation in a manner that compensates for dispositional tendencies, and so forth.

Job sharing is a multifaceted phenomenon. It requires individuals willing to share a job, organizations open to hiring pairs of individuals for each job, and managers cooperative in coordinating work across pairs of individuals occupying each job. All these aspects of job sharing, however, are facilitated when the job mates paired together in a job-sharing arrangement are compatible with each other.